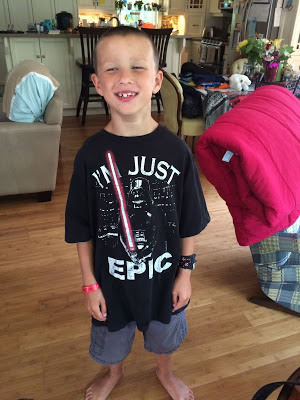 I have always been wary of a label for Josh… once upon a time there was a doctor who insisted that Josh was autistic because he couldn’t speak. I fought back and got him assessed by another set of doctors who quickly shut down the autism diagnosis and said that his language was a stroke issue and it’s been that way for many things in his life. I hate labels! However, one label that I have not been able to argue and that has stuck with him through out all the assessments, through school (to date), and which has become an increasing problem at home is just three letters. ADD (the acquired variety and without the hyper active component). I have known that this is an issue for some time now and I have learned that it happens in many kids with CHD, but last year it became a growing and more pressing concern. I sought help from a few doctors and finally on Monday it was decided to put him on medication to help him; and to give him his best shot at his new school. Since we now know that he doesn’t have an LD and he isn’t language impaired and that he is in fact in ‘catch up’ mode we agreed that we want him to have the best possible chance at learning that we can give him. He started on the mediation yesterday morning…

Today I went for a walk with him… and for the first time in his life (NO KIDDING)… we had a back and forth fully understanding and understandable conversation. We covered two topics on the entire outing and we talked. He asked questions, he waited for my reply, he considered my answers and he responded in kind. I am so full of hope and so fully aware of the blessing that this is. Label’s it seems can sometimes be good things.

Last night… Josh was still wide awake at almost 12am! This is a kid who typically goes to bed at 7pm  and often asks to go to bed. In fact three times this week he has asked to go to bed BEFORE his brother! Josh didn’t start sleeping through the night until last November… almost a full 7 years of sleep deprivation… I am afraid that this new medicine is taking us back a step, and yet already I can see how much he needed/needs it. There is hope of course, hope that he will grow accustomed to this new medication, or that last night was a one off… if it’s not I have a lot of sleepless nights ahead I suppose.

The end result of course is only that today (though I am totally worn out after sleeping (sort of) beside him for most of the night, I am more hopeful than ever about this man who has taught me so much. I find myself excited to see the changes and growth! 🙂

P.S. Coffee intake will go up… is that possible?