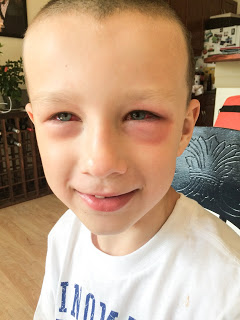 It’s been a long two weeks… I wrote last about Josh’s amazing assessment and hours after that post we had a call saying that his eye surgery would be that week. On May 28th, just one month post op for his heart Josh went again into the OR to have his eyes corrected. Every time you send your child into the OR, be it for something serious like heart surgery or mundane like eye surgery, there is an anxiety that can’t really be described. We have done this too many times, he has suffered too much. The amazing thing though, is how he copes, how he braves the challenges that are set before him. I have seen him literally laugh in the face of these challenges and I have seen him rise above. May 28th was also the day of his big school transition meeting, and a large BBQ for Tim’s work. It was a nutter day… a fully insane day. Yet, as I lay down in bed that night I realized two things.

1) He now has the entire summer to not worry about surgeries or appointments (once we get through his last one tomorrow) For this summer… he can be a kid. That is a really really great thing! He so deserves that after this year!

2) While it was a lot in one day… we managed it. We had help (we couldn’t have done it all without a lot of help) Tim made the school meeting and advocated for Josh, getting him placed in the exact program I had been hoping for in Kaleb’s school! (Both boys in the same school FINALLY will take a large burden off me next year). The BBQ was a success and Josh… well, he was home and his own bed so I have nothing to complain about there either.

The first few days post-op were (in a word) brutal. The first hours of recovery they wouldn’t let me in the room because he was ‘having complications’ … as it turns out they are a day surgery post-op recovery so they don’t often have heart kids in there. They were freaking out about his SAT levels and heart rate and blood pressure; and thought that he was having trouble. Finally I begged to be allowed in and once there, I saw that while he was not doing great, it was all down to the fact that he was anxious and in pain and scared because he couldn’t see. (Who wouldn’t have high BP or a fast heart rate in that situation?). I sat beside him and explained that he had a patch in his eyes and that he was in the recovery room. We talked about the patients in the beds beside him, the nurses and what they each looked like, and as we talked he settled. We gave him some powerful pain killers and he slept, deeply, his SAT levels dropped and alarms started going off, sending our nurse into a panic. (It was actually a little funny). I reached over and silenced the alarm, moved the O2 mask to his face and his levels normalized… at that point she bowed to my wisdom and calmed right now. Within 45 minutes of being allowed to see him he’d had 3 freezies and was in a wheel chair headed down for a blueberry muffin at Tim Hortons’ (his new favourite treat). The wisdom here is the power of healing that can be found in a mothers love. (not trying to bolster myself here either, it’s a statement of fact. Kids need their Moms).

The surgeon had warned me that ‘recovery would be hell’ and she was right. He was in so much pain, and Josh’s eyes are his weak spot. When he’s anxious, scared, tired, worried, sad… he rubs his eyes. It’s always been that way and here, in the midst of great pain and anxiety and he couldn’t rub. For two days he couldn’t open his eyes they were so swollen and painful. However, on day three he woke up feeling so much better, by the fourth day he was back at school and came home almost euphoric. He is a different child these days. He’s so much happier, and though he can’t explain why, he says he can see better, and given the happy child running around our house these days I would say it was worth the pain of those few days.

I also had the chance to see what a beautiful man our Kaleb is turning out to be; he care and compassion for his brother through this process has been an honour to see. He guided him, fed him, retrieved things for him, described things to him when he couldn’t see and one morning, when he could see that Josh was needing to hold the cloth over his eyes (the only thing that brought him comfort) and try to eat, he jumped up, grabbed the cloth and said ‘Ill hold this for you Josh, that way you can eat and mama can drink her coffee’. He is a beautiful child, who is being shaped by this journey just as we all are. It’s humbling and awesome to see.

It’s been a long few weeks, sleep in this house is a luxury, Kaleb’s asthma is bad again and both boys are alternating nights of nightmares that keep us up. BUT… and this is important… Summer is coming quickly. Just a few weeks left of school, a few last appointments for the boys (Kaleb for asthma related stuff and Josh for his ECHO and post-op). We have two graduations, Kaleb is graduating kindergarten and Josh is graduating out of Bloorview. Then… then it’s all just fun and summer rest! I am counting the hours!!