It is Christmas eve. I love this particular holiday. This year we gifted the whole family with a new puppy named Max. He’s a joy to have in the house but he is a puppy and he can be rambunctious; lots of walks are needed to keep him at a good level of sane while in the house. My shoes demand that he be too tired to chew on them! This morning I set off for a walk with him, the streets were fairly quiet, it was mild out and it was still dark. I passed several people on my walk and a funny thing began to happen. In an age when ‘Merry Christmas’ has been replaced by ‘Happy Holidays’ I was pleasantly surprised when a young man passed me and wished me a Merry Christmas, a few more steps and an older woman walking her dog also wished me a Merry Christmas, then it was the older homeless man on the corner near Queen, then the Muslim woman with her son, and the Muslim man walking his elderly parent into the grocery store. In fact, not once, did I hear Happy Holidays, and I was walking through a very Muslim area of town. Each person I passed (except for a few who seemed to be rushing to get somewhere) smiled at me as I passed and wished me a Merry Christmas. It was so great! Their smiles, their Christmas greetings gave me the spirit to move down the street offering the same smiles, the same greetings.

Tonight, we went to the service at the church where the children put on a very cute portrayal of the Christmas story, it was mayhem. Kids dressed as sheep, and several animals that I couldn’t identify… even an elephant, angels, shepherds, scribes,  kings, and of course Mary and Joseph. In the madness something came home to me… this is exactly what Christmas must have been like back in the first century. Not the trees and gifts or things like wishing people the latest politically correct thing… but the madness, the mayhem. The busyness that saw a pregnant woman needing to give birth in a barn, the animals, the noise, the smells. At the end of the service Tim took the advent candle and he lit my candle, I in turn lit the boys candles and we turned and lit the candles of the boys behind us… the light spread from row to row until the entire church was lit; all from a single light.

I think of the beautiful light of the star that night, how the light of the world was born in that barn, and that single light has passed from person to person and lights the world. It may not always seem bright, in fact in recent days with the threat of terrorists and the fear of the politically correct it seems that it’s darker than ever; but that light is still lit. It is alive in me, it’s alive in many people I know and as we move into the new year my prayer for you is that you pass your light along, share it with the person sitting behind you so that we light the world.

Merry Christmas my friends. Thank you for sharing in this wonderful year with our family! 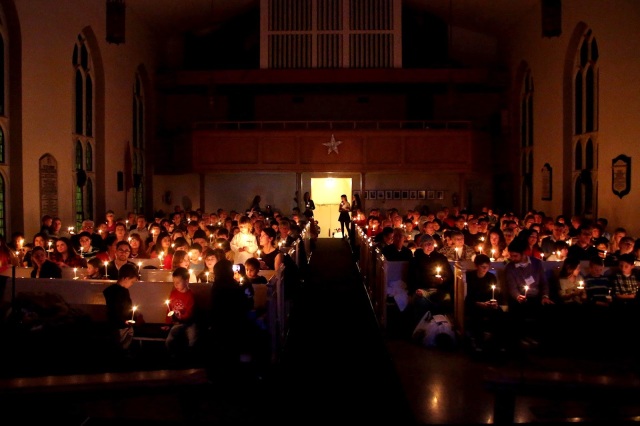