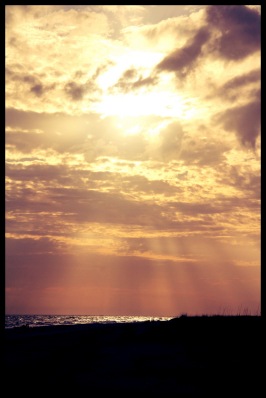 I am not sure how it happened but I found myself interested in a sci-fi series called ‘Falling Skies’… Last night we watched the latest episode and today something about it struck a cord with me. The premise of the show is that an alien species has declared war on earth and is seeking to make a hybrid human/alien. It’s weird… I realize this. (Again, I state that I have no idea how I got sucked into this show).

In the episode that last night the aliens send a weapon into the territory where rebel humans were hiding out. It was a space ship/egg thing that landed in the middle of their make shift town, and when it landed a fog came out of it and started spreading through the whole town. If a person got trapped in the fog (inevitable since it’s fog and you can’t hide from it) it glued the person to the spot they were in. They were defenseless. Once the person was stuck, a snake like alien attacked and seeked to latch itself to the person, not killing them, but changing them into a monster/alien. (The hybrid I suppose).

I look around me and I see so much pain and grief and sorrow, in our life, in the lives of friends and in the lives of the strangers we pass on the street, or really, any time we turn on the news these days. Pain, sorrow, grief, worry, fear, anxiety, anger; they are all like that fog. They move into our lives stealthy, then they trap us and we become paralyzed by it, defenseless, unable to move forward. If we do nothing we risk it turning us into something we don’t recognize, someone angry, someone so drawn into themselves that they can’t see beyond that fog, basically a very ugly version of the person we are.

Two of the characters in the show were trapped in the fog, the fear and the unknown were inevitable. The ‘general’ and a young boy just turned teenager were alone in a room and the boy was scared. The general was giving him a pep talk and he said ‘We will keep fighting’ and the two, though stuck and totally defenseless began to chant it. “WE WILL FIGHT TO THE END”

The chant didn’t save them, I won’t tell you how they got out or of they did (on the off chance a reader isn’t caught up) because it’s not the point of what I am trying to say. The point is the desire to keep fighting, even when thoroughly stuck in the fog that is consuming us.

I find that sometimes the fear and worry or the sadness and anger in my own life sometimes becomes so enveloping, so all encompassing, that it seems there is just no way out. There is no where to move, no where to run, and not enough strength to move if I wanted too. This past few weeks I have been hearing clearly God saying to me ‘We will fight to the end”; not those words exactly of course, but words just as comforting and empowering as the words that the general spoke to the young boy.

Just to clarify… I don’t like sci-fi… never have… and again for clarity sake… I don’t know how I got sucked into Falling Skies; but I blame my husband!