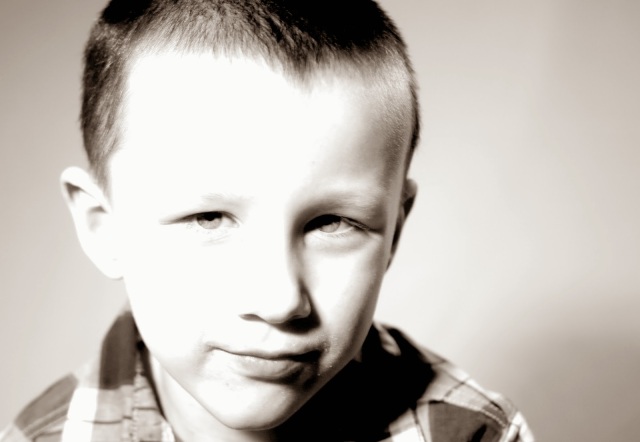 Sometimes, when Josh and I are alone, I get a glimpse into his mind, get a chance to hear what he is thinking about… it’s rare but when it happens I am often surprised by the depth of thinking he displays.

This morning Kaleb slept in and left a good hour for Josh and I to share breakfast together. We were chatting about all sorts of things and as often happens he started to ask about his heart, and his scar. I don’t know how the conversation started this morning but we talked about his birth story, and that led to him wanting to see pictures. He saw one of the ones I had of him in hospital and as he looked at it I asked him how he felt when he saw the picture. His response was ‘I feel broken when I see that picture’… it moved us into discussing those feelings and how he isn’t ‘broken’. Then he asked me where his scar was and I explained that he hadn’t been born with it, that he got it when he was 6 months old. This led to the next batch of questions about old he was for each of surgeries. I said he was 6 months, 2, 3 and then 5 years old. Then he asked ‘when will my surgery be when I am six? and I said he wasn’t going to have one when he was 6, so he asked ‘when I am seven?’. At this point I know I can’t say he won’t need one when he is seven, I can’t make promises like that. So we talked about how having a special heart means that we are given a special gift, a gift that allows us to fully  enjoy each day and be grateful that today he doesn’t need a surgery. He thought about this long and hard and then while rubbing his scar he said ‘I don’t want to lose my pig valves’ and I explained that someday he would need new ones but they would still be pig valves. At this point he looked up at me and said ‘I don’t want them to use a knife to give me new pig valves, it scares me and hurts me’.

Now this may seem like a very normal thing to hear… but for Josh it is the first time he has ever articulated his fear around the surgery itself, the first time he has ever said anything about being afraid of it, or remembering that it hurt. In fact, most times when he speaks about his surgeries it’s to talk about the outcome (the fact that he has pig valves or that he has no leaks), not the ordeal. I have heard of his fear of ‘the dragon’ which has plagued him since his second surgery, I have heard of his fear of the dark that started after one of the surgeries, in fact, he has always been clear about being ‘afraid’ but he has never once articulated a fear of the surgery itself. Not once has he put the two together in words, possibly even in his mind. So, while this may seem very ‘normal’ for a child who has been through what Josh has been through, as his Mum I see it as a huge leap forward in his understanding of  his situation, for him and for me. How many nights have our halls rung out with screams? Too many to count. I’ve always known the two are connected but hearing him say that he sees that too, seems like a step forward, one step closer to leaving the dragon behind.

What do you say? I couldn’t think of anything to say to him; so I said ‘I would be scared and hurt too; I get it, its scary to think about that’. Then I asked to see his scar and he pulled up his shirt. I touched it and I said ‘Do you know what I see?’ and he looked at me waiting…

“I see a line of courage, a line that says “I am brave”, I see a line across your chest that says ‘I am alive’, I survived”. He looked at the scar again and rubbed it up and down and I continued. “If you are never scared, then you can never learn to be brave, not many people get to learn so quickly how to be so brave.” He smiled at this and then touched his scar again and said ‘I think I will keep it”

There is nothing better to me than when Josh shares a bit of himself with me, allows me into his mind and shares with me his fears and dreams and hopes and worries. Knowing him, all of him, fills me with joy and being able to talk to him and ease his anxiety a little helps the mothers heart in me that always feels so helpless. We talked at length about learning to not borrow trouble from tomorrow, that we have to enjoy today for what it is. I said to him that if he had to have a surgery when he was seven, or eight or nine, then we would deal with it and worry about it then; but that TODAY he doesn’t need one, and we can celebrate that. I don’t know if that part got through to him but I know he left the conversation looking more at peace than during the talk.

Later he came back to the kitchen, this little boy who has a language impairment, and told me all about his head, thorax and abdomen… He amazes me on so many levels! What a joy and blessing he is.