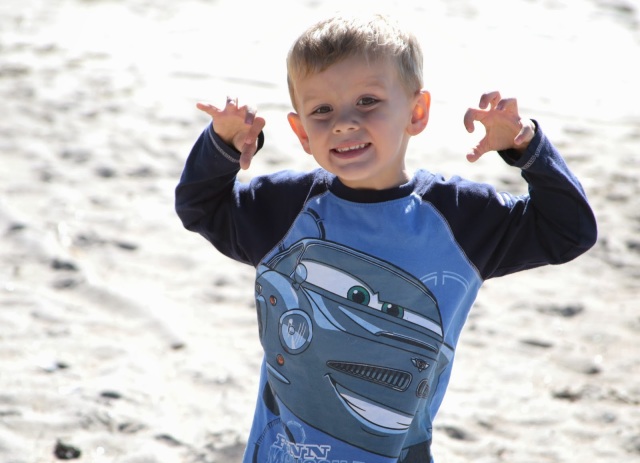 I have always spoken about Josh’s brave spirit, his strength and his heart (literal and figurative). I sometimes think I haven’t told you about how incredible my youngest son is. How brave his is, how strong, how infinitely warm and kind and compassionate he is. If ever there a boy who could steal his mama’s heart, the Kaper is him. He is the first to jump in and protect me, the first to stand up for me, and trust me, he will not go against me… even if it’s just in a tickle fight between the rest of them and me. If Tim dares try to tickle me, Kaleb jumps in to protect me(sometimes showing his fiercely protective teeth with a growl thrown in for good measure), if Josh says something against me, Kaleb looks at me and says ‘I love you Mummy’. He is such a loving little boy, and he loves with his entire heart and soul.

This week Kaleb had to have a needle. He held on to me tightly and when that moment came he simply said ‘ouch’ and hugged me a little harder. He hasn’t had to endure the knocks that his brother has, a needle to him is a big deal and he was so brave, he was also a touch shocked by the pain.

The boys have a book about a bucket. The premise is that each of us has an invisible bucket above our heads; if you are mean, say something unkind or do something unkind then your bucket dips and you have a little less water in it and you empty their bucket too, making you feel bad. However, if you are kind, do something nice for someone then you fill their buckets and yours gets filled too. I don’t know what I think of the moral and theological premise of the book but I love that it’s teaching my boys the benefits of being kind to people, and to each other. In our house we have bucket fillers and we try to not be bucket dippers. I say all this so that you understand what Kaleb said on the way home from the doctor this week.

We were in the car headed home when he said ‘Mummy?’ I looked into the rear view mirror and answered him and then he said ‘that doctor is a bucket dipper, she hurt me’. While I hate to see either one of my boys hurt I have to say that Kaleb needed this. For too long he has viewed Josh’s frequent doctors visits and hospital stays as a good time that Josh was having with his Mum. There is nowhere Kaleb would rather be than with his Mum, I don’t say this to bolster myself but simply to state fact. He’s my boy, and his favorite spot is with me. So, when I take Josh to all his appointments, Kaleb is left feeling a bit put out. I think he honestly believes that Josh is having a good old time with Mum, and we just don’t want Kaleb with us.

Kaleb having a bit of pain, not enjoying the doctor this week means that he also got a small taste of what ‘going to the doctor’ means for Josh. At the same time it also opened my eyes to a different form of strength, and bravery that rests within the heart of my youngest.

He is the one who has always felt left behind, he’s the one that has endured all the same anxiety for his brother but hasn’t been able to fully understand all that has happened. Last year was a really hard year for all of us. Josh was so sick for so long, we had appointments several times a week that Kaleb had to go to his Grandparents for. He wasn’t told much, we didn’t share with him or try to help him understand because he was so young, too young to comprehend it all. The best I can guess is that he must have felt second best, maybe a little bit like a third wheel, and possibly pretty insecure about his place in our family. Yet, despite all that he is strong enough to forgive us, brave enough to love us anyway, and loyal enough to stand beside me despite the ways I have already failed him.

Kaleb is a kid who knows what he wants, he is strong willed, creative and bright. He can challenge me and argue with me but at the end of the day he won’t go to sleep without a kiss, he won’t let me leave the room until he’s told me that he loves me ‘so much’ and if he senses that I may not be at my best, he makes sure to be the first to hug me, the first to sit in my lap and just be with me. So, while this blog gets a lot of Josh updates, it’s not because my youngest isn’t one of the most awesome kids in the world, or because I love him any less. He stole my heart four and a half years ago and he’s held it in the palm of his hand ever since.