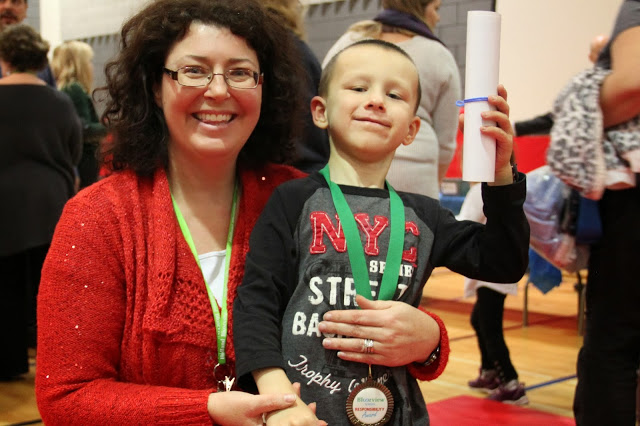 Yesterday was a good day, I was asked to attend an award ceremony at Joshua’s school to witness him receive an award for Responsibility. He was one of 48 students who received an award and I couldn’t have been prouder of him. His teacher and principal were the ones who gave him the award and their words were special. Josh is eager to learn, he takes responsibility for his belongings, his school work and his attitude within the classroom. He is always kind and fun to be around and when given something to work on he goes at it full steam ahead. (these were his teachers words to me before the award was given, and I am glad she told me because as I watched through teary eyes I have to admit I didn’t hear anything they said, I was too busy watching him). The award was a surprise for Josh, he had no idea he was even nominated and you can see from the picture above that he was very proud of himself. During the ceremony there was a little girl (probably about grade 2) who WALKED to the podium for after teaching herself to walk again. Chills run down my spine again as I review it in my mind. Listening to the crowd cheering, seeing her smile as she slowly walked up to receive an award for courage, it’s a memory I will remember for the rest of my life.

In other news… Last June we had an eye clinic appointment and the doctor told us that Josh would most likely need a second eye surgery. She decided to put it off and allow us to deal first with his heart and then make decisions about his eyes. Before the heart surgery she asked for permission to go in and have a good look at his eyes while he was sedated since he wasn’t very co-operative when he was awake. We agreed. Today we had the follow up appointment and I have to admit I was geared up to hear that we would need more surgery… HOWEVER… it turns out that he will NOT need anymore eye surgery. This is GREAT news! The not great news is that his eye problems are not actually ‘eye’ problems but rather a result of the stroke and nothing can be done. His eyes do not work ‘together’ but it shouldn’t impact his learning, it’s not affecting his sight and it seems to not be bothering him that much. So, other than annual check ups we are cleared!!

We take hits… but sometimes the hits are home runs! This week, Josh is hitting out the park!