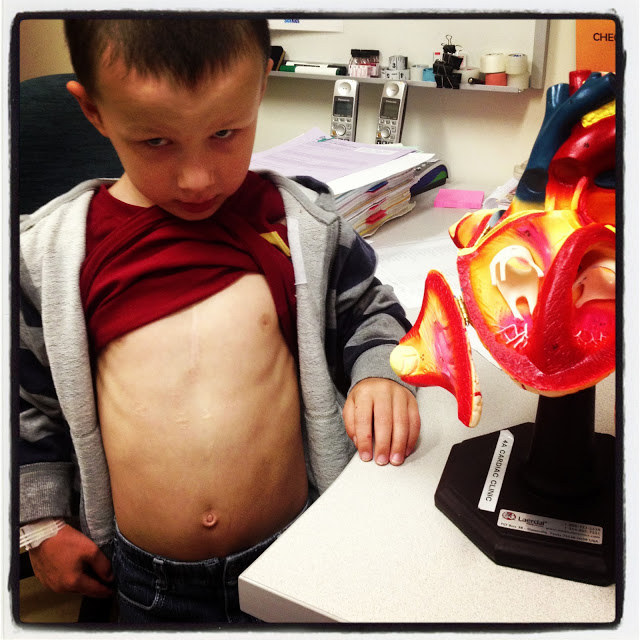 As most of you know today was our pre-op day for Joshua’s catheterization. We had an early start (for me at least) and arrived at Sick Kids at 8am. Last night Joshua and I had a talk about the coming week and what to expect. We chatted about what the doctors were going to do, why they were doing it and then we talked about what it might feel like. Josh seemed to understand it all and other than offering the suggestion of having the doctors tape his heart to fix it he didn’t have a whole lot to say about it. I asked him if he was scared and he said ‘No, the doctors will fix it’ with the faith that only comes when you are young. After our chat (and snuggle) I asked him if he had any questions, and all he could come up with was to ask if he could bring his ball to bounce in the doctors office. After settling on allowing him to bring Thomas with him he went back to his room and said good night.

This morning, when we went into the doctors office there was a plastic model of a heart sitting on her desk. Josh saw it and became very interested in it. He asked me if it was his heart and I explained to him what it was, then he asked me to show him where his heart was broken so I did my best to explain it to him. The nurse came and in and we began to discuss what tomorrow will look like for him. Josh was playing with Thomas but every once and a while he returned to the model and looked it over. Finally he turned to me and asked ‘Did you fall and break my heart Mummy?’ *big sigh… “no, sweety sometimes we are born with something that is broken’. He thought about that for a minute and then asked ‘Did I fall and it got broke?’ to which I again explained that no one caused this to happen, that it wasn’t anyone’s fault that his heart was broken. I told him that I was born with ‘broken’ knees, and had to have surgery to fix them, I told him how Kaleb was born with ‘broken’ lungs and needed medication to fix them, and again tried to explain that things like this sometimes just happen. By the time our ‘chat’ was done both the nurse and I had eyes full of tears. How do you explain the ‘why’ to a child when you can barely figure it out for yourself? Even the nurse didn’t attempt to past the lump in her throat, instead she promptly said she would get child life to come see us.

It was after we were leaving her office and heading down to get the chest X-ray and blood tests that Josh started to ask ‘is it fixed yet?’. Every doctor, technicial, nurse became the person who was potentially going to fix his heart. I can’t count the times I had to explain that it was fixed yet, that it wouldn’t be fixed tomorrow… forget trying to get his head around the fact that his heart will never be fixed. That he will always have a broken heart, and that all we do to him is just buying him more time. Why would I even want to explain that to a five year old?

To say that I am emotionally exhausted is putting it mildly. I had no idea that Josh was wrestling with the why and how of his situation. I was in no way prepared for the questions he posed today and it’s left me drained.

The good news is that the child life specialist came for a visit with Josh and she was great at explaining what would happen to him tomorrow. Thank you for all the warm and lovely emails and posts via Facebook. It is such a comfort to feel the support of so many at our backs.