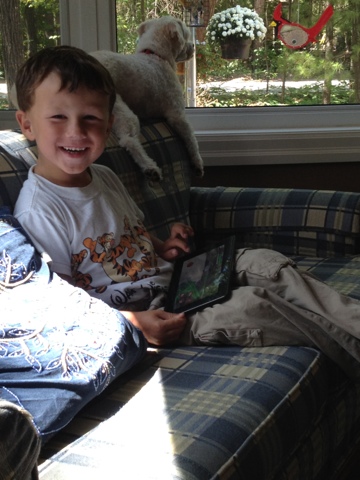 What is amazing to me is this: Despite the set backs, despite the frustration, the tears, the anger, the doubts, the fear, the wretched feeling of hopelessness, despite all of that I can sit down with Josh and play a game with him and have him encourage me to do better, have him tell me ‘you can do it Mummy, try again’ and when I crash the car or lose the game he can flip to an easier race and say this one is ‘easy’ and then when he wants me to crash against the car in the race with me (to eliminate my fellow contender) and I say I can’t he says ‘you can Mummy, you good at crashing’. His sense of humour is fully in tact, he’s funny and he’s a tease, he’s smart and caring and one of the best and most encouraging kids I know. If you say ‘I can’t’ he pipes up with ‘you can’.

Last night, in the depths of my frustration it dawned on me… I am saying “I can’t” and Josh is saying “I can”. Isn’t that more important than anything science says about him? If he believes he CAN then maybe, just maybe he WILL.

I have been saying “I can’t” and God is saying “I can”… so for all the ‘deficits that they say Josh has, he’s the one teaching me the power of will, the power of words, the power of God and the reality that with hard work, maybe hope isn’t all lost yet. If Josh ‘can’ and if God ‘can’ then who am I to say ‘I can’t’?