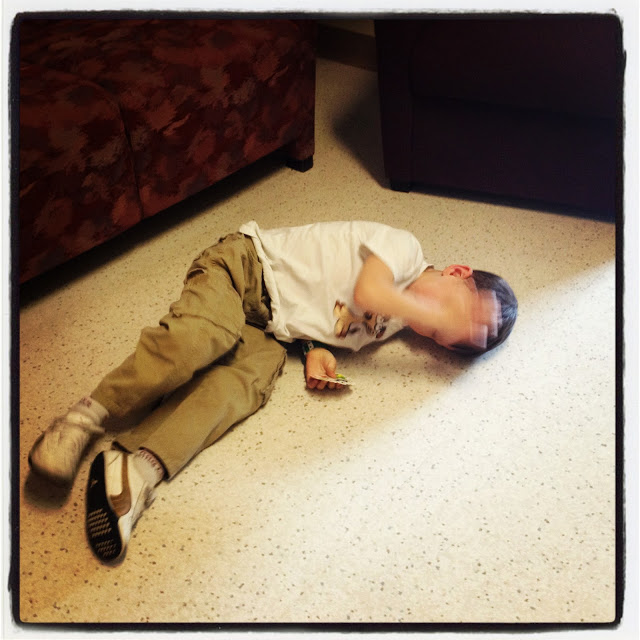 On Thursday Josh and I once again made the trek to Sick Kids, this time to visit with the stroke team and talk about Josh’s stroke treatment plan. The appointment was to be at 10 am, plenty of time for us to get him to school with lunch thrown in for good measure. (Apparently boys like to eat regularly). Once in the clinic I realized how busy they were and I felt the doubts creep in, could they possibly get to us in time? As it turns out, no they couldn’t. We sat and sat, Josh doing his best impression of a patient child with nothing in the world he likes better than sitting in the doctor’s office. At 11am the nurse came in and called Josh’s name, hope surged through me as I grabbed our stuff and we went with the nurse to get weighed and measured. She asked all the  hundreds of questions that they ask every visit and just when I thought she would say the doctor will be right in she instead said ‘we don’t have a room for you yet, you can go back to the waiting room’. My heart sunk, we were in for a long day! It was about 20 minutes later than we were taken to a room, where we were asked again to wait, only unlike the waiting room this room didn’t have toys or TV… Josh’s impression of patient child was beginning to fade in it’s enthusiasm. Shortly after that we had the research doctor come in, (Josh is a part of a research project for kids who have suffered a stroke), she asked the same hundred odd questions that the nurse asked and then left us. We again sat down and began to feel the affects of pure boredom. A resident came in, asked the same hundred questions, looked at Josh and made him do a few things like kick and jump (very exciting indeed!) then, after giving him a sticker she too left. It was now after noon officially. Josh was hungry, he was thirsty, he was bored, he was beginning to melt down (as evidenced in the picture above).  Finally, the doctor showed up and we sat down to talk. Now, let me back up a little bit here and tell you that Josh was supposed to have an MRI done in September but in the end it was only one week after Josh’s last surgery and I didn’t want to traumatize him with yet another general and hospital stay, and I was under the impression that Josh’s stroke was caused by a catheter procedure and a faulty heart. (The clot formed when they entered his groin with a catheter, it travelled up to his heart and instead of moving to his lungs it was shunted through the whole in his heart up into his brain – the hole was closed in another catheter procedure after his first open heart when he was six months old). Basically, I didn’t think we had much need to worry that he would have another stroke because the hole was closed. Apparently I was wrong. I was told on Thursday that Josh had had a silent stroke after the first series of strokes, and we were never told about it. This blew my mind! How can he have had another stroke and I was never told? Was I just not listening? I called Tim but no, he’d never heard about this either. So our son is at risk for more strokes, and if he is still stroking it’s only a matter of time before he has another catastrophic event. We were told under no uncertain terms that we could not miss another MRI, that we need to know if he is silently stroking, and in my head I felt like saying ‘if I had known he  was still at risk I wouldn’t have cancelled his last one! I even spoke with the nurse about it before I cancelled!! How could we not have had this information? (You can insert a sigh here).

I remember the night we were told he’d had the strokes, it was late and we had been in the ER for hours, I was so tired and when she showed us his MRI and explained the ‘event’ to us all we could do was stare in shocked amazement… babies don’t have strokes do they? I thought it was only for old people. I had no idea that it would lead to a lifetime of questions for our little boy, and I thank God I didn’t know it because I don’t know how I would have lived with all those questions for that long. We still have questions, we still live with the affects of that stroke and we still apparently have things to worry about in regards to those strokes and now we have to hope and pray that we don’t discover that he’s had any more silent ones.

So the next question of course is ‘what happens if he has been silently stoking?’ Up until now I haven’t even thought of that as a possibility but since it is then what do we do? Well, we put him on blood thinners, which is a needle twice a day, which he had for three months when he was little. Not fun I assure you! My hope of course is that this is all for naught, that he hasn’t had anymore strokes and that the new MRI will prove that the old damage is the same, that new pathways have been formed and that there in no evidence of any repeats of his last ‘infarct’ (a word that caused us endless giggles at the time – probably given how tired and shocked we were).

I have asked you all to pray countless times for Josh and Kaleb, and you have all done so in a breathtaking display of love for us and for him. I would like to ask you to again pray for this little kid. Pray that this chapter in his life is closed and that we don’t need to reread it, it wasn’t a particularly good read the first time round I have no desire to reread it!

That said, after the appointment we headed down to the blood clinic where Josh flipped out at the sight of the room he knows too well, knowing what was coming all he could say was ‘No, go home now!’. The poor kid was seriously distraught, but the nurse was so good that he didn’t even know the needle was going in until it was actually in and she was so fast that it was out before he could even cry. All he said was ‘owe, it hurts’ and then it was over and they took him to the treasure box. (small mercies after a day like that). We then headed home, got Tim and Kaleb and made the trek to Niagara Falls for a fun night of Laser tag and hotel life!