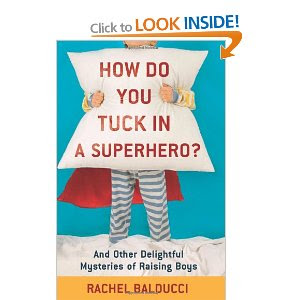 When I had boys I thought I knew what to expect, I used to live in a community where there was a whole slew of little boys, I babysat them all the time and growing up my best friend was a boy. I knew what it would take to raise boys! I was an expert so to speak…

Once, while in Austria I was staying a friends apartment in the farmhouse near by, I heard a little knock at the door and when I opened the door there was a little boy (a child I loved dearly that we will just call P). So, P was standing at the door, shorts, raincoat and boots that reached his knees (he lived in the apartment above my friend’s place). He looked up at me, and said ‘Laurie, I got attacked by a chicken’ (remember here that we lived they lived in a farmhouse so this is not out of the realm of the possible). I invited him in and asked him what happened. He said (very matter of fact) that all he had done was try to chop the chickens head off. His face, was one of nonplussed confusion as to why that silly chicken would want to peck at him. We sat down at the table and chatted about why that chicken would attack him, and then he told me what he wanted to be when he got ‘old’. Interested I asked him what that might be, and he told me that he wanted to a be a Scientist. A noble aspiration I said to him, and then I made the mistake of asking the dreaded question ‘why’? His response was simple, ’cause I can blow things up’. With that he got up, scampered out the door and up the stairs to him own apartment. I was left sitting at the table giggling to myself. Yes, I knew boys, I knew what it would take to mother a boy.

Then I had two of them, and let me tell you, raising boys into men is much different than having the occasional visit from a sweet little P.

As you know I have been reviewing books these days, and this month I read a book called ‘How do you tuck in a superhero’. From the introduction I was in love with this book! Suddenly I was not alone in the joy of boys. This woman (Rachel Balducci) has five boys! YES, I said that correctly… FIVE BOYS! I can’t imagine the antics that must happen in that house! Yet, I don’t need to because Balducci walks us through the joys and struggles of raising boys in a funny and open way. Her honesty is refreshing, her stories of life with boys is fun and leaves you realizing that the things your boys do is actually totally normal and not at all the fault of your bad parenting. The way she describes their back yard, well, it makes me feel mildly better about the state of my own. The odd things that boys do, like stabbing dogs with forks, trying to see if your brother will fit in the dryer, wondering what will happen if you stick your dinosaur down the drain, the cookie in the printer or your brother’s head under water… I read this book and between laughs I felt a peace settle over me. My boys are normal.

The book is written in small doses, little chapters, easily read between shuttling the kids around, breaking up fights or kissing ouchies. It’s written by a mother, for mothers. I really enjoyed it!

As a result of reading this funny little book I am able to relax, enjoy the insanity for what it is and know (thanks to Balducci) that it only gets worse and more dangerous from here on out. My job, is not to cure them of their rambunctious ways but to guide them safely to adulthood (hopefully with some good hygiene as well) and though there will be accidents along the way, and yes even some bad behavior, the reality is that all the decent men we know in the world today were once little boys, and they too did crazy things, drove their mother crazy with worry and with fighting, but in the end, they turned into decent men (with the odd ‘annoying men behavior’ thrown in for good measure!)

Thanks Rachel for a great read and for sharing those wonderful little lessons on raising boys so that for those of us who are new to this phenomenon called ‘boys’  know we are not alone, we are not ‘bad mothers’!