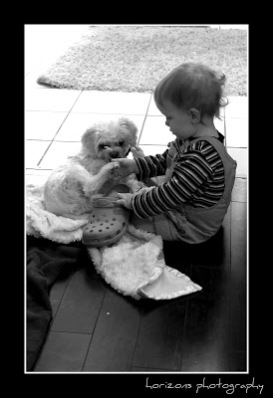 The beauty of boys can sometimes get lost on me, I love them, they are wonderful, but do I really understand what having two boys means? I am starting to clue in, every once and a while (about a thousand times a day!) it hits me… I am the mother of two boys.

Let’s start with the obvious. How many times a day do I say ‘stop punching the dog’, ‘don’t hit your brother’, ‘can you get along for two seconds… that’s all I am asking for, just two seconds!’… it’s a daily montage of life with boys. The physical brutality that these two exude is beyond my understanding. The constant battles, the bashing of heads, bruises, black eyes (of which both are now sporting), the cuts, scrapes and other minor injuries that they inflict on each other is something I just never had to deal with as a child, adolescent or adult until of course I had these two wonders enter my world.

Tim, he gets them in ways I can’t understand, he’ll say to me ‘This is life with boys Laurie’ and I get the feeling that it will only get worse. The stronger they become the bigger the injuries. Tim tells me horror stories of the fights he had with his brother and I cringe. Now, let’s not make the mistake that girls are better, I have memories of my sister and I going at it verbally and there is a part of me (of which we won’t ever tell the boys for fear of them thinking that fighting is okay) that is thankful I don’t have to listen to the constant diatribe of ‘she said I was stupid’ or ‘Mummy, she took my toy’. However, to see a girl on Sunday, dressed up in her pretty little dress, NOT sporting a black eye or bruised knees I have a small little pinch of envy for the mothers who are raising them.

The next most obvious difference to raising boys of course is the manner in which they play. I have never seen kids trash things like I have seen these two destroy their toys or the room in which they are housed. Cleaning up after them is a full time job in itself, forget trying to actually do something productive like clean the dishes, wash the floors or any of the other countless jobs that need doing in order to keep this home looking like more than a bachelor pad. Toys in this house get thrown in all directions, at any number of objects (including the dog). How many times have I gone into our ‘playroom’ better known as ground zero in this house and felt like crying because the mess I just cleaned and organized so nicely the night before has been trashed yet again. This is again the time that I point out that on Sunday morning when I pick up the kids from the nursery there is always a few little girls (all donning their pretty pink dresses) playing so sweetly with their toys, pretending that their doll is going shopping or that the car is driving the kids to school.

Just a few weeks ago we were at the Leafs game (thanks to the Starlight foundation) and at the end of the period the boys raced around the box (we were in the players box and I am sure we won’t be re invited) tackling each other, thumping each other, chasing each other and generally wreaking havoc. As this was going on a family came up the stairs, a Mom and Dad and two pretty little girls. The parents (the Mom in particular) looked at our boys with eyes the size of the moon. Even their girls watched in awe at the two monsters (better known as Josh and Kaleb) tried all their wrestling moves. It was an impressive display to be sure, and all I could think is how numb I have become. Not so long ago I would have seen this and thought ‘what kind of parent allows this behavior?’ I of course, didn’t realize that one day I would be the parent!

As I write this I have had to break up two fights and ask Kaleb not to stab the dog with his fork.

Should I even begin to describe meal times around this house, or what the toilet looks like when Josh is finished, or the amounts of football, I will have to endure in my lifetime?

Yes, boys are a wonder… and no I am not sure I will ever get used to the craziness that has consumed our lives though I wouldn’t trade them, I would happily trade the behavior at times.