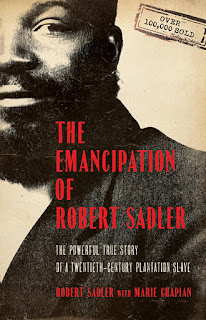 I am white, Caucasian, pale… whatever you want to call me, that is the colour I was born. I never took anything for granted more than I have taken that ONE fact for granted. Born into a loving home, in an affluent country, with hope, prospects, peace. I have thanked God for each and every one of those things, but being white? Not once.

I have been reading a book, called ‘The emancipation of Robert Sadler’ and I have to do put it down countless times because I can’t bear to hear some of the things this man had to endure as a child. If only he had had that option too, to put the book down, to stop reading when the story got too tough.

Born in 1911 to a Mother who loved him, but a drunken father who couldn’t have cared less. He had many older siblings but only one younger, his baby sister Ella, his self described best friend. His world shifted on it’s axis at age five after a series of heart breaking tragedies, just when you think it can’t get worse, it does, and his father sell him into slavery with his two older sisters. Life for him would never be the same. He worked from sun up to sundown, treated as nothing better than a dog, beaten, shamed, given no education, no hope, and told that he had no soul so heaven was not waiting for him. I don’t want to ruin this story for you, I think it’s one you will want to journey with Robert on yourself, and you will find yourself as I was; amazed at both human cruelty and human spirit.

What struck me, what touched me most was that once Robert found freedom, he still felt a disconnect, a missing piece. His journey will take you through his search for ‘freedom’ and what it really looks like. This man, in his honest and ugly yet beautiful tale will take you on a journey you will not soon forget. I am still processing all the things that made Robert the man he was. I wish I had known him.

I have been struggling with how to review this book, it’s got so many topics, so many things to rave about and yet I don’t want to be your spoiler, so what do I say? Then tonight, as I was heading to bed something dawned on me.

We have a home here, however temporary, and it’s not a fair world. We hear daily on the news of the horrors that humans can do to one another, we see it in the faces of the survivors years later, the same pain, the same agony in the depth of their eyes. This man, this amazing man was touched by God, made humble before him, was able to forgive, was able to survive.

This book begins in 1970 with him feeding, giving up his bed, nursing, a drunken man, a man who must have at every turn reminded him of the father who sold him for enough cash to buy whiskey, it would have reminded him of his ‘master’ who in a drunken stagger would make him dance by poking him with the red hot fire poker. How do you stare in the face, and love that face when it must be so painful and instill so much anger and resentment, if not for forgiveness; if not for a heart truly given over to the love God calls us to. What a beautiful example of what we should aim to be in our lives.