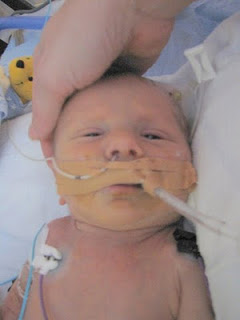 This past week I was asked to write Joshua’s story for a fund raising campaign for Cardiac Kids and the Stroke team at Sick Kids hospital. As I wrote the story I was taken back to two days after a procedure done on Josh to repair his heart (Saturday April 26th 2008) when during lunch Josh started to have seizures. We took him to the ER and after a battery of tests including an MRI we were told that Josh had suffered a massive stroke at the back of his brain and several deep tissue minor strokes. The neurologist on call told us that had this stroke occurred in someone older, the effects would have been devastating and most likely deadly. Thankfully Joshua was a baby and the brain is still plastic enough to build new pathways, and discover new ‘routes’ to get what needs to be done, done. Yes, we are dealing with delays and there is still residual side effects of the stroke (depth perception issues, weakness on his right side etc.) However, he’s here. He’s alive, but only because he was so young. Now, imagine that stroke occurring in an older person, your friend, your mother or father, sibling or Grandparent. Would you know the signs in time? I didn’t. This has been floating around on Facebook and I had to post it because it’s so important. So easy, and yet it can save someone you love.

STROKE: Remember The 1st Three Letters… S.T..R …
My friend sent this to me …and encouraged me to post it and spread the word. I agree. If everyone can remember something this simple, we could save some folks.

STROKE IDENTIFICATION:
During a party, a friend stumbled and took a little fall – she assured everyone that she was fine and just tripped over a brick because of her new shoes. (they offered to call ambulance)

They got her cleaned up and got her a new plate of food – while she appeared a bit shaken up, Ingrid went about enjoying herself the rest of the evening. Ingrid’s husband called later telling everyone that his wife had been taken to the hospital – (at 6:00pm , Ingrid passed away.)
She had suffered a stroke at the party . Had they known how to identify the signs of a stroke, perhaps Ingrid would be with us today.

Some don’t die. They end up in a helpless, hopeless condition instead. It only takes a minute to read this…

A neurologist says that if he can get to a stroke victim within 3 hours he can totally reverse the effects of a stroke…totally. He said the trick was getting a stroke recognized, diagnosed, and then getting the patient medically cared for within 3 hours, which is tough.

Remember the ‘3’ steps, STR . Read and Learn!
Sometimes symptoms of a stroke are difficult to identify. Unfortunately, the lack of awareness spells disaster.
The stroke victim may suffer severe brain damage when people nearby fail to recognize the symptoms of a stroke.
Now doctors say a bystander can recognize a stroke by asking three simple questions :

If he or she has trouble with ANY ONE of these tasks, call the ambulance and describe the symptoms to the dispatcher.

NOTE : Another ‘sign’ of a stroke is
1. Ask the person to ‘stick’ out their tongue.
2. If the tongue is ‘crooked’, if it goes to one side or the other that is also an indication of a stroke.

A prominent cardiologist says if everyone who gets this status shares it; you can bet that at least one life will be saved…….