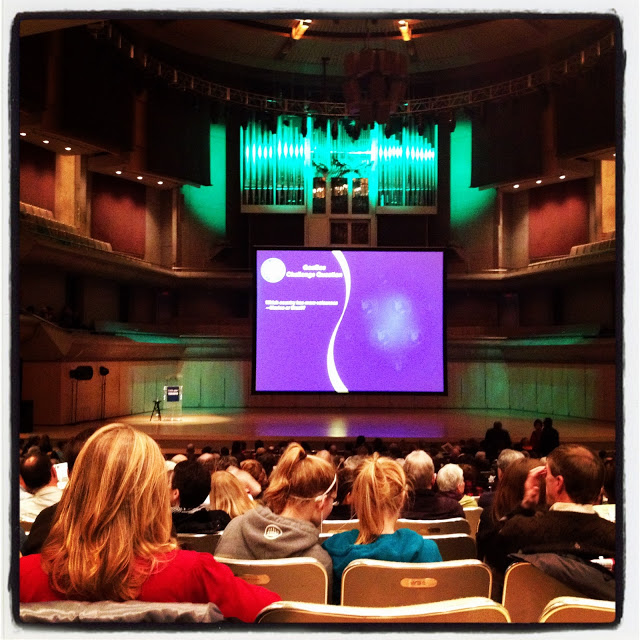 Last night was date night at the Haughton House… we were to go see another National Geographic live event at the Roy Thompson Hall thanks to a good friend of ours who gave us her tickets. I had thought we were going to see another Photographer like we had last time, but we didn’t. Last night we heard from a geneticist Dr. Spencer Wells. He is the founder of the The Genographic Project.

The talk, while mostly scientific was though interesting in it’s information was definitely based in belief. He lost me from the beginning because it began with the premise that we all began as apes or chimps. Starting on a basis of belief that I don’t hold to be true is like trying to teach someone about Jesus from a Bible that they don’t believe in. I struggled with this question through out the talk, and found that he took something that is true (DNA) as his hypothesis and made all the rest of his facts fit into his theory. He came up with question after question, and yet still left us with questions and somehow managed to not answer even one. This of course is not his fault, you can’t explain some things. The part I found particulary interesting was a skull they found in Chad, North Africa, the oldest skull to date, and when studied it showed that the man had stood upright, at which point he moved quickly on to his next bit of information without explaining how this fits into the theory of evolution. When he outlined our family tree he had ‘Adam and Eve’ in hyphens, just as I did there, questioning the validity of that belief with a mere hyphen.

It is a quandary isn’t it? Where did we originate? Where was the garden of Eden? Is the Genesis of our humanity account in the first book of the Bible something literal or is it poetic. I have heard talks by Christians and non-Chrisians regarding this subject and it would seem that all seem to have a theory and then make the facts fit that theory. It leads me to wonder if we will ever get a real answer on this side of heaven? Does it matter? Will it change my faith? If someone could absolutely prove that evolution took place will it make me see my faith differently, ultimately I guess the answer is No. It would however change my view of being made in God’s image. It would make me rethink a lot of things but my faith is secure. How God chose to create us is for him to know and us to find out one day after this life is passed. However, it led Tim and I in a very interesting discussion on the way home about the beauty of creation, the string of DNA that is so infinitely beautiful, can trace our ancestors and their migration patterns, how we can know today where we came from originally is something that I find uber cool! One woman, did the test, and though from Hungary she discovered that her origins began in Siberia. On study, this proved to be true, there were a group that did in fact migrate from Siberia into Hungary. Thousands of people have the same genetic markers as Genghis Khan, which given his character can easily be explained as he raped and pillaged his way through his world, building a large concubine and raising sons just like him. His Y chromosome being passed along from generation to generation and showing up in the present day. It’s all very fascinating.

No, my origins don’t matter, they are interesting and would be cool to know, but they don’t matter in the end. What matters is the why, why are we here? What is our purpose? Those questions cannot be answered by Science, not in my mind at least. If you are a scientist I would love to hear your opinion. The why, if ever answered, is what matters most and though the talk was interesting I have to say I would have been more impressed if he’d started on a basis of the ‘I don’t know’ belief, because let’s be honest, we all have theories, even creationists have only ‘theories’ ranging from seven day to millions of years. No one knows the answers to our origins, no one can tell us exactly with absolute proof where we began, or when or how (ape or dust and water?). So, while we all have beliefs, to skew science to fit a theory is to me a kin to taking truth (in this case DNA) and making it fit your belief, not just simply seeing it for what it is.

I feel like I am getting confusing here… so I will try to be clear. I enjoyed this talk, I found it highly interesting and I value the information that science is giving us about our past, about migration, about how climate and culture have moved the human race around the world. My only issue comes when that information is given to prove something that isn’t necessarily true. Had the good Dr. Spencer Wells simply given his talk without adding his definitive opinion about his beliefs I would have had a much easier time hearing what he had to say.

Which then leads me to more questions about how as Christians we approach evangelism. Are we starting with our beliefs and trying to explain it through a filter of belief that others don’t yet have? Or, alternatively should we start at the beginning and explain that we don’t have all the answers but this is what we do know… if someone doesn’t believe that scripture is inspired by God, how can you use the Bible as your tool to convince them there is a God?

2 thoughts on “Where do we begin?”