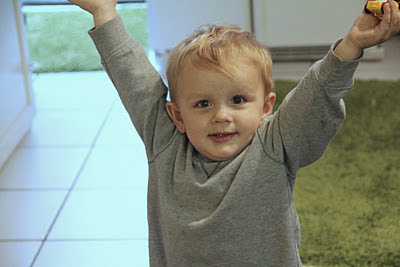 At 4 am I was awakened by my sweet Kaleb by one yell, a bit of a cry and then silence. I waited in the dark to see if he would cry more, but thankfully he went back to sleep. I however, was awake and awake I remain. So now I am sitting here, an hour later Blogging. In five hours our house will be full of kids here to celebrate the birth of my second child. Kaleb turns two on Sunday!

Yesterday afternoon after a botched attempt at a nap Kaleb and I went for a walk to the park, Josh was with Daddy so I had Kaleb all to myself, and he had me. We walked along the street looking at the things that only a kid could find so amusing, the light pole, the fire hydrant, the bushes, the flowers, and of course the trees. He had to touch everything, look at everything and stop to inspect things for at least 5 minutes each. Our progress was painfully slow but thoroughly enjoyable. When we got to the park he went up and down the slide, watched the kids in the school playground, raced in and amongst the trees, and didn’t stop smiling once. When recess was over and the school playground emptied we made our way past our little park to the big one. He raced ahead of me, and there he spend twenty minutes racing around the giant slides, up and down the ramps, and through the sand from one end of the park to the next. At that point he spotted a whole host of pigeons in the baseball diamond and off he went. He ran in circles laughing and yelling fly (‘fy’) at the top of his lungs and laughing, laughing so hard that I was surprised he could still run. Every once and awhile he would look over to me, as if to see if I was having as much fun as he was, and I was.

On the way home, though normally independent and not wanting to walk and hold hands, he reached out for mine and held it most of the way home. Looking at me and chatting away in gibberish about the fun he just had. His eyes were lit up, his smile contagious and his giggle impossibly cute. I fell in love with him all over again.