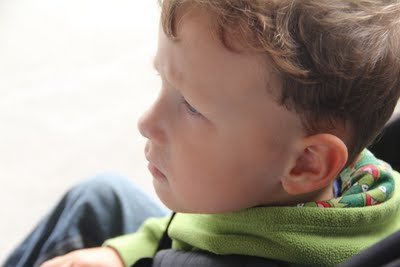 The first thing Tim and I did this morning was sit down on Joshua’s bed and fill him in on what would happen today, we did our best to assure him that we loved him, that this was all going to make him feel better in the end and that he would hear some scary things today but that at the end of the day we would bring him home with us. He seemed okay, though it’s hard to know what the little man is thinking when he can’t talk to share his feelings or worries. Tim drove us to the hospital and dropped us off, then he went home with Kaleb and waited for the babysitter before coming back to join us. During this time Josh was booked for a few tests. The first was a blood test, and as soon as they took his blood he began to cry, not so much in pain but in knowledge. He closed his eyes as tight as he could and sobbed, he continued to sob all the way to the chest X-ray area where he put his head in my lap, holding tight to my hand and his monkey. They called us in for the X-ray and he sat where he was supposed to sit, did everything he was supposed to do without being asked and as we left he once again began to sob. It wasn’t until we got to the clinic and found some toys that I managed to distract him long enough to stop the sad crying.

We were taken to a room where the nurse came in and asked all the requisite questions, and then the resident surgeon came in to explain the surgery. He began to try everything he could think of to distract me from what the doctor was saying, until finally Daddy arrived and I was able to play with Josh while Daddy listened to the doctor. The resident was the same one who sat in on his last surgery in December, and he was able to go over in detail every aspect of his previous surgery, and then explain the new surgery, the risks and the fears as well as the hopes. As it turns out, no one, not even the best surgeon in the world can figure out why his pulmonary valve is no longer functioning, they all just said they are very surprised and hope it doesn’t happen again. He then explained that there may be a need for a shunt from the brain to the lungs, again something they don’t want to do but may need to do. All the information, all the statistics are laid out before you and then they hand you a pen and ask you to sign on the dotted line.

Did you know that the death statistics are 1/20? (I won’t bore you with details on how I feel about that little number, I am sure you can guess). We signed, what else are we supposed to do?

He had a duplex scan and watched Dora, then back upstairs for a chat with Dr. Van Arsdell who again went over the statistics with us and shared his ideas on either repair, complex surgery or a full replacement. His thoughts on this are that we will likely need the replacement but that he will do everything he can do prevent that from happening. A complex surgery is not as likely since his heart sack is where they would need to take the tissue from and since this is third surgery there is not likely going to be any ‘good’ tissue to use. (A complex surgery means that they in essence create a valve from his own heart tissues). It all sounds terrifying. Through out all the tests, talks and explanations Josh held my hand tightly, but his tears at least had stopped.

We took the train home and Josh sat beside me with his head resting on my shoulder, his big eyes sad, his beautiful smile gone. Before bed I asked him if he wanted to talk about today he didn’t respond so I explained that in order to make him feel better they needed to do an operation, that it would hurt and it would scary but that Mummy and Daddy but more importantly God would be with him the entire time and we would take very good care of him and that when it was over we would bring him home with us, he listened but his eyes were closed. Then I asked if he wanted to talk anymore or if Mummy should stop and he simply said ‘stop’. We watched an episode of George to cheer him and then I tucked him into bed, said our prayers and had good night kisses.

My mothers heart is breaking tonight. This just sucks on so many levels. (Not an overly eloquent way of putting it but I can’t think of another way to tell you how I feel.)

7 thoughts on “He knows”