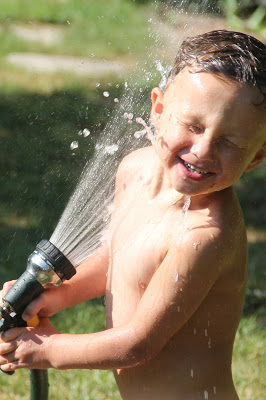 Just a few moments ago I was standing at the kitchen sink, washing the sippy cups and watching out the window as Josh played with the hose, filling a bucket, dumping the bucket, putting his trucks in and out of the bucket, watching them sink, when out of nowhere a cat hopped the fence and landed about 3 feet from him. It startled him, he watched the cat with obvious interest before deciding to hit him with a stream of water from the hose. I sort of giggled to myself and let it go as I watched the cat dart off to the back of the yard and Josh resume the filling of his bucket. As I watched though I noticed that every few seconds Josh would look back up to where the cat had disappeared, looking to see if that cat had returned. Finally, (I think the cat must have hopped back into the neighbours yard)he grabbed up his car and came running up the steps of the deck towards the back door and I could read his lips enough to know that he was calling me. I smiled and went to the door; he had a big smile as he excitedly said ‘Mummy, cat, Mummy, cat’. Thankfully I had seen the situation transpire so I knew exactly what he was telling me, there was no guessing at it this time. I said ‘did you see a cat?’ and he again said ‘cat’ so I asked him to show me where the cat was, so he took me by the hand and led me to back of our garden and said ‘cat, go, there’ and he pointed to the back. Then he happily moved towards the slide, the cat forgotten. He was totally unaware of the overwhelming flood of emotion rushing through me. This child had no idea what those three words meant to me today. Hearing him, actually sharing something with me. Telling me about the cat, answering my question with words, it’s such a small thing, so small, but man does it feel good! It’s slow, those three words strung together with a pause in between but they were spoken with perfect clarity, God knows this is a slow process, but days like today happen and I see these little steps, tiny improvements, glimpses into the thought process of my son and I know that God is listening, he is hearing me and he is answering. My silent prayers are being answered.