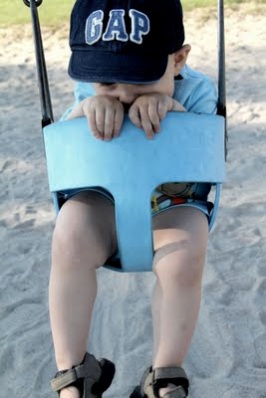 Today was our final day of holidays after two weeks of time with family we decided that today we would spend our time as our four person unit having fun and being together. We woke up, had breakfast and coffee and then headed to the ROM for a morning of playing with dinosaurs and water. We walked into the dinosaur exhibit and Josh clung tight to my hand, obviously scared of the giant bones turned raptors. They hung above us, rose up beside us and Josh was literally biting his nails and clinging to me. Though not one tear, no whining, just the occasional ‘no’ when we asked if he wanted to touch them or move closer. He watched in an odd fascination but he also had his eyes open for the exit signs and would pull me over to one if he got close enough.  (At one point he pointed to the window and repeatedly said ‘car’). My little man was frightened.

Kaleb was enthralled, pointing and laughing and yelling in excitement. He loved every second of it so we asked Josh to stick it out and explained that they wouldn’t hurt him. As we moved through the exhibit I looked down at my sweet little boy who was so clearly afraid and yet so bravely soldiering on. What a kid! He amazes me, my little brave heart, my lion. Towards the end he stopped biting his nails, let me hand go once or twice and I even caught him smiling towards the end.  As we finally got ready to leave Josh and I got up close to one of the dinosaurs and he whispered ‘bye’ to it, and then when I asked if he would like to see him again he whispered ‘again’

So many times I look at these two boys and marvel at the differences in them. Josh, who can watch the most terrifying parts of cartoon movies and laugh, and Kaleb who cries when Woody leaves his friends to Lazzo at Sunnyside and every time tries to warn Buzz by yelling ‘NO’ ‘NO’ ‘NO’… Josh who gets the biggest laughs from watching Tim and I play fight and Kaleb who cries and rushes to my defense. Josh who gets creeped out by living creatures, Kaleb who reaches out and touches pythons without thought. Josh who stands in the face of a dinosaur biting his nails and Kaleb who laughs with joy. They are enigmas really, both brave and strong, both with their own fears and concerns even though so drastically different.

My Mom once told me that I will be amazed by how different my kids will be from each other and yet how much I love them both equally and yet differently and I never really understood it until I had these two amazing boys. They are night and day, the best parts of Tim and I with a little of our quirks thrown in for good measure. I will never stop being amazed by them and the things they do, the people they are and the boys and eventually men they will become. What gifts they are!